Click here to purchase tickets for IN THE KEY OF LIFE 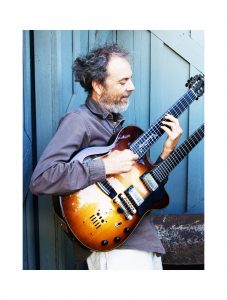 Even in the heyday of Southern California surf music, I never imagined that this pop music sensation might one day acquire a second cousin from the jazz side of the family. Jazz composer, guitarist and avid surfer Peter Sprague credits surfing and his father’s collection of bossa nova records as the primary influences forming his unique “saltwater jazz” style, which he and his quintet offered Sunday (Jan. 18) at Balboa Park’s Mingei International Museum.

Not only did Sprague enjoy the sponsorship of the classcial chamber music collective Camarada, now in its second season presenting at the Mingei, but flutist Beth Ross Buckley—Camarada’s founder and director—played with the band. And quite well, I might add, especially for a musician steeped in Baroque sonatas and Romantic woodwind quintets.

The program featured Sprague’s own music, from his popular “Na Pali Coast” and “Uluwatu,” both musical tributes to treasured global surfing beaches, to his modest deconstruction of the Beach Boys’ iconic “Good Vibrations.” A classic upbeat Sprague offering, “Uluwatu” percolates with a steady pulse indebted to Brazilian jazz, and subtly escalates to a hefty guitar solo before the final cadence. “Na Pali Coast,” a trove of some of his most ingratiating melodies, opens with a hint of mystery, but quickly inhabits that blissed out comfort that embraces the heart of saltwater jazz.

Sprague wrote the duet “Saltwater Dreams” for Beth Ross Buckley and him to premiere on this program, and the quiet, edgy ballad with its deftly interwoven themes is one of the best pieces I’ve heard from this composer. Replete with suave, emotionally telling flute themes cradled by rich, colorful guitar harmonies, “Saltwater Dreams” would be persuasive on either a jazz or classical concert. Guitarist and flutist brought their polished, effortless techniques to the duet’s demands.

It was hard to tell if Sunday’s audience was the same audience that attends Camarada’s classical offerings or primarily jazz fans who came to hear Peter Sprague, but it really doesn’t matter much when you fill every seat in the house, as Camarada did that evening in Balboa Park. 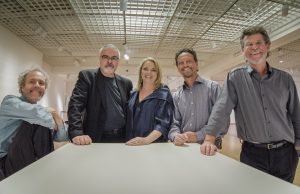 The mission of Camarada is to elevate and enrich the San Diego community and beyond by presenting phenomenal chamber music concerts, while engaging diverse audiences through visionary and educational programming, featuring living composers, commissioning new music, and igniting a powerful connection between the audience, artists and music.

Yes! I want to know more about Camarada concerts and FREE videos.